Coffee 101: The Discovery of Coffee 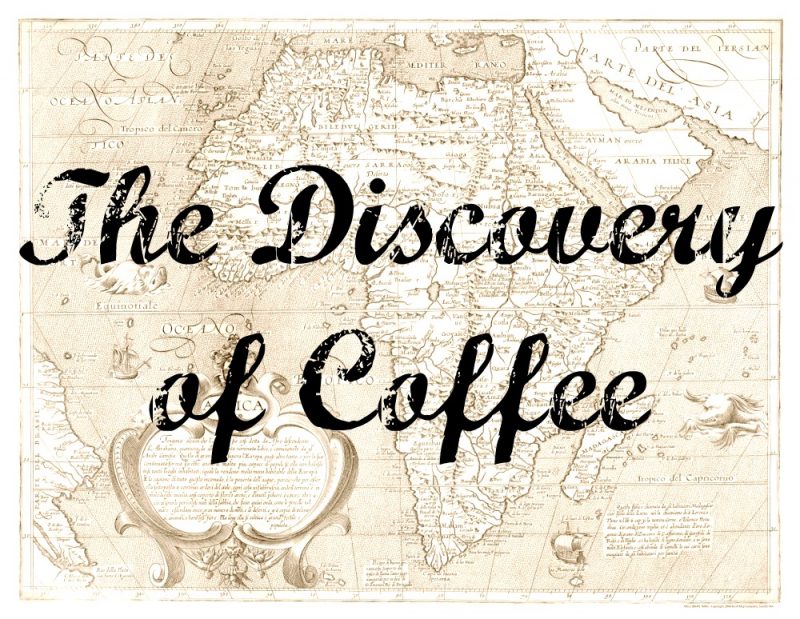 We’re back with our second post in our Coffee 101 Series: The Discovery of Coffee! Coffee has a long and interesting history, including dancing goats, smuggling and bouquets of flowers spiked with coffee seedlings.
Coffee is native to Ethiopia, in Africa, where it is still a popular part of local culture and traditions. Today over 12 million people in Ethiopia are involved in coffee production. A common phrase in Ethiopia is “buna dabo naw,” which translates to “coffee is our bread.”
Evidence of humans drinking coffee can be traced to the middle of the 15th century in Yemen’s Sufi monasteries. It is not known who actually discovered coffee, but there are several interesting theories and stories.
One story credits the discovery of coffee to a Yemenite Sufi mystic who was traveling through Ethiopia. He noticed some very energetic, lively birds and decided to sample the red berries he saw them eating. He quickly felt the energizing effects of the berry.
Another tale tells of a man named Omar, who was exiled from Mocha to a desert cave. He was starving and only found red berries from a small shrub to eat. They tasted bitter so he tried roasting, and later, boiling them. The fragrant smelling liquid he created from boiling the berries kept Omar alive for many days, allowing him to eventually return to Mocha with his “miracle drug.”
In the tenth century, coffee is said to have been eaten and fermented into wine. Ethiopian tribesmen used the coffee berries as an energy ball, crushing and mixing them with animal fat to sustain them on long journeys.
The most colorful of all of the coffee origin tales is the story of Kaldi and his goats. Kaldi was an Ethiopian goat herder who was looking for a spot to allow his hungry and tired goats to graze. Instead of pasture, his goats came upon a bush with bright red berries, which they devoured. The goats began to behave strangely, some stories say they danced, others claim the goats wouldn’t sleep at night. All tales agree that the goats became very lively after eating the berries. In one version of the story, Kaldi eats the berries and then shares his discovery with the monks who use them to make a beverage so they can stay awake through their late evening prayers. In another version, Kaldi shares his discovery with less open-minded monks: they throw his berries into the fire, creating a delicious aroma. Curious, the monks take the roasted berries out of the fire and grind them before dissolving them in hot water, thus making the first cup of coffee.

Regardless of which story is true (the story about Kaldi did not appear in writing prior to 1671, though the legend states the story took place anywhere from the 6th to 10th century), the image of dancing goats discovering coffee has become quite popular!
Coffee’s rise to becoming the world’s most popular drink after water began in the Islamic world. Coffee was believed to have restorative powers and was used as a religious potion to keep Muslims awake during their evening prayers. Coffee beans, exported from Ethiopia, were grown first in Yemen before spreading across the Arabian peninsula. In 1720 the port city of Mokka was the global coffee trading center. As the Ottoman Empire grew, so did coffee’s range. Soon people in Syria, Egypt, and southwest Europe were enjoying the “wine of Islam,” so named because Muslims do not drink alcohol, but were permitted to consume coffee.
Coffee houses quickly became popular meeting places. The first European coffee house outside of the Ottoman Empire was opened in Venice in 1645.
For centuries, coffee plants were carefully guarded. Exports of live plants or viable seed were strictly prohibited; only roasted coffee was allowed to leave Middle Eastern countries where it was grown. In order to become a widely grown and consumed beverage, coffee would have to be stolen and smuggled out of the Middle East.
In the 17th century, some enterprising Dutch merchants managed to sneak some unroasted coffee beans to Europe where they grew coffee in greenhouses. In the early 1700s, coffee seedlings were grown on islands in the Caribbean, as well as Brazil, Kenya, and Tanzania.
Coffee reached Brazil in an interesting way. Portugal wanted to get in on the lucrative coffee market by growing the crop in Brazil. The King of Portugal couldn’t get coffee seeds from neighboring French Guiana due to tight border restrictions. The King sent Sergeant Major Francisco de Melo Palheta to settle the border dispute and secretly obtain coffee seeds. In order to get the coffee out of the country, Palheta had to get creative. He seduced the French Governor’s wife, Madame D’Orvilliers, who secretly gave him a bouquet laced with coffee seedlings before he left French Guiana for Brazil. Palheta is credited with planting the first coffee trees in Brazil in the state of Pará in 1727. Today, Brazil is the largest producer of coffee in the world, a position which the country has held since 1852.

Coffee became popular in America after the Boston Tea Party in 1773 when it became unpatriotic to drink tea. Today coffee is consumed daily by 54% of Americans over the age of 18 (that’s about 100 million people!). Specialty coffee in the U.S. is now billion dollar industry with Americans spending 18 billion dollars on their favorite drink a year.
Next, on our Coffee 101 series will discuss how coffee is harvested and processed. Stay tuned!