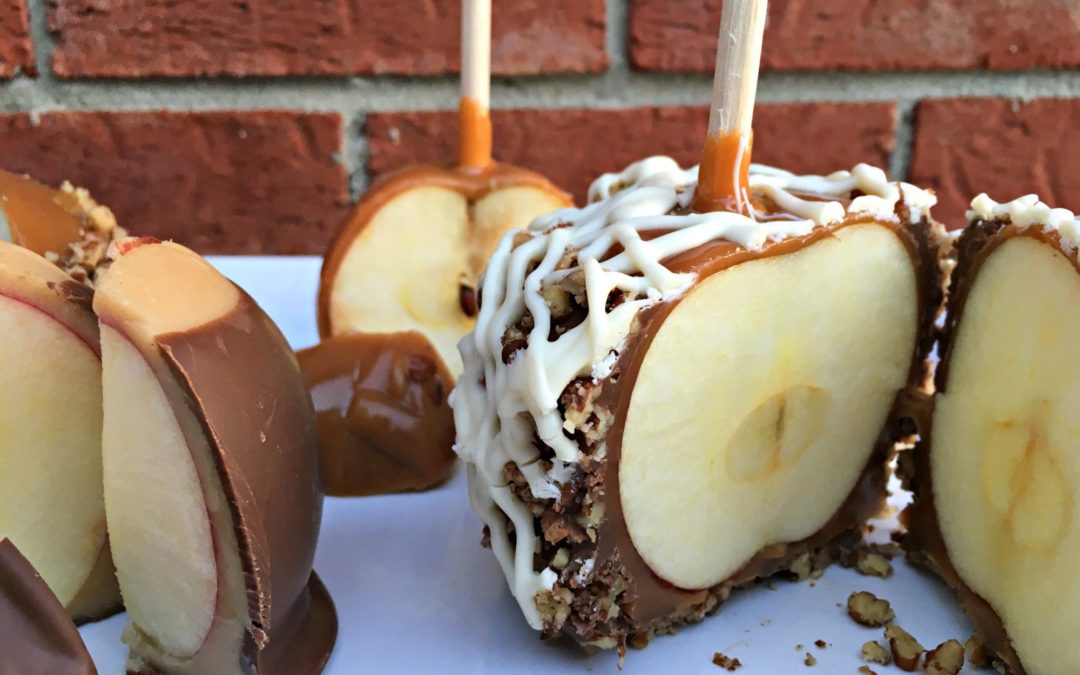 Caramel Apples: the Flavor of Fall

Fall is time for hot and sweet apple cider drinks and our specialty caramel apples. We dip thousands of caramel apples every week during October.
Apples have been a popular fruit in North America for hundreds of years. The only apples that are native to North America are crab apples. Crab apples are much smaller than regular apples and are usually extremely sour. European immigrants introduced the tree we know today; Apples were first grown in America in 1625.

Before there were caramel apples, there were candy apples. William W. Kolb invented red candy apples in New Jersey. He experimented with red cinnamon candy for Christmas. He started dipping apples in the mixture and made the first candy apples in 1908.
Caramel apples were also invented by a candy maker experimenting with holiday candy. In 1950, Kraft Foods had extra caramels left over from Halloween. An employee, Dan Walker, had an idea for the caramels. He melted the caramels and started dipping apples in them. They were very popular! For the next ten+ years, all caramel apples were hand-dipped. In 1960, Vito Raimondi invented the first automated caramel apple machine in Chicago.

We like to do things the old-fashioned way at Winans, which often means by hand. We use our original caramel recipe, handed down from Max and Dick to Joe and Laurie. Our Ohio-grown apples are locally sourced by Fulton Farms in Troy. We put wooden sticks in our apples by hand before hand-dipping them in caramel. The caramel is extremely hot when we dip the apples!
We make five different types of caramel apples. We have a classic caramel apple. We also make a caramel apple which is rolled in pecans. Our deluxe caramel apple is dipped in caramel, then milk chocolate, rolled in pecans and drizzled with white chocolate. We make a sea salt caramel apple which is dipped in caramel, then milk chocolate and sprinkled with sea salt. Our most unique apple is our Buckeye apple. This apple is dipped in our peanut butter delight center before being dipped in milk chocolate. It’s like a giant buckeye candy with the tart crunch of an apple.

What Winans Thinks of Sweetest Day

Celebrated every October in the U.S., Sweetest Day is a holiday many believe to be made up by industries to boost sales before the upcoming holiday season. Couples from all over will be put under societies pressures to buy and out-perform others for their “sweetie”. We would like to tell you a different story…
It is a little-known fact that Sweetest Day was actually launched in Cleveland, OH. The holiday originated in 1922, in the midst of the docile times of The Great Depression. You may be surprised to find out that Sweetest Day is celebrated in very few regions of the United States, mainly the Great Lakes area. At Winans we also like to celebrate it by promoting the holiday and to encourage our customers to celebrate Sweetest Day traditionally and in the modern sense.
The origin and purpose of Sweetest Day are actually quite interesting. Herbert Birch Kingston is the man responsible for starting the holiday. Kingston was an employee of a candy company and philanthropist. It all began when he and several other candy confectioners took the effort to distribute 20,000 boxes of candy to newsboys, orphans, the elderly, shut-ins and other forgotten people of the local area. Kingston believed that people in that time needed something to make them feel a little sweeter, and who better to give to than the people who had nothing? The holiday did not become popular until these efforts were recognized elsewhere and the word spread.
Later, in the 1940’s, a similar occurrence of philanthropy occurred in New York and several charities and orphanages were donated thousands of boxes of candy. At this time the holiday was proclaimed to occur on the third Saturday of every October. Not until the 60’s did Hallmark begin making greeting cards for Sweetest Day, thus, voiding the term “Hallmark Holiday”.
Today, as previously mentioned, the holiday is celebrated in a romantic sense. It is viewed as another holiday for people to “woo” the one that they are after. However, we want to encourage you to celebrate Sweetest Day in its origin as well. We hope that this year you spread some happiness to the less fortunate or someone in your life that you know works really hard and never gets recognition for it! Friends, family, neighbors, co-workers, the janitor at your school, a teacher, or any number of other people would certainly appreciate a small token of your care and appreciation. (It would not hurt to take a box of chocolate home to your husband, wife, boyfriend or girlfriend either!) As a chocolate company who donates to several charities over the course of the year, we would love to see our customers pay it forward as well.
Enjoy the holiday and spread the word about what the Sweetest Day of the year really entails. We hope to see you in our stores soon to find that perfect gift for someone special. Thanks for visiting us here on the blog!
This information was found from Sweetest Day Born in Ohio from the Mount Vernon News and Sweetest Day – National Holiday Founded in Cleveland By Sandy Mitchell