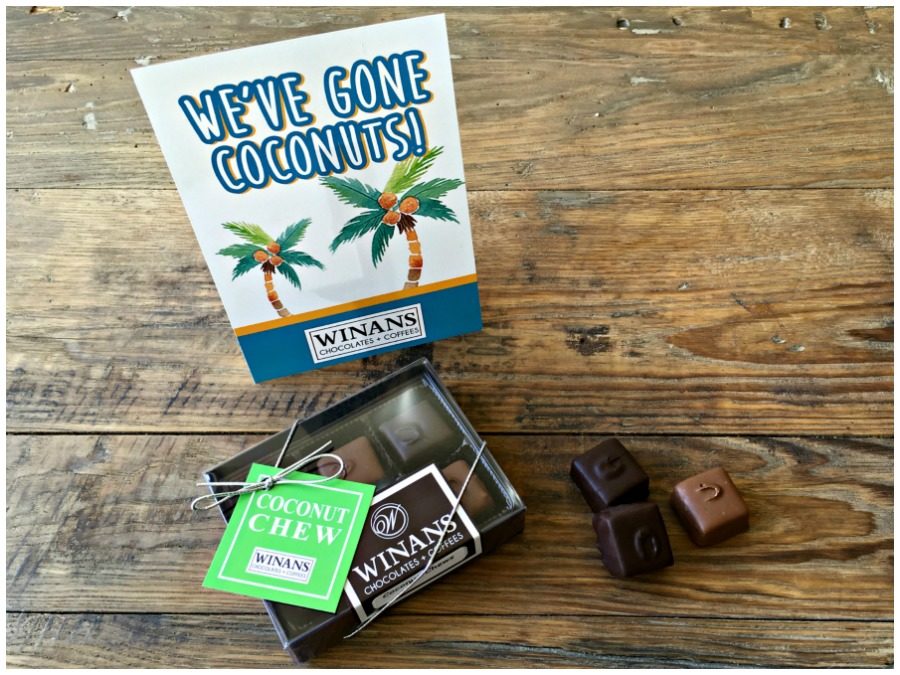 We’ve gone coconuts here at Winans Chocolates + Coffees! We’re featuring all of our favorite coconut sweet treats this summer, including a blast from the past: our coconut chews! We used to make coconut chews on a regular basis at Winans, but about ten years ago we debuted a new cream: coconut almond bliss. We’re not getting rid of coconut almond bliss, but our coconut chew is here to stay!
These are some of our favorite coconut treats:

Piña Colada Smoothie: non-alcoholic smoothie made with real pineapple puree and cream of coconut
Toasted Coconut Flavored Coffee: a customer favorite!
We recommend pairing our coconut treats with our fair trade and organic single origin Honduran coffee. This coffee has notes of lemon and a hint of caramel, which perfectly compliment the tropical coconut flavor of our coconut chews!

Coconut has a wide variety of culinary uses – though we like it best when it’s covered in chocolate! Coconut oil is used for cooking in its liquid form and as butter or lard in its solid form. Coconut meat can be eaten fresh or dried and is added to both sweet and savory dishes. Coconut flour is used in baking, it makes a great gluten-free flour alternative for those with gluten sensitivity.

Coconut water is consumed as a sports drink and contains vitamins, minerals, and antioxidants. It can ever be used as a substitute for blood plasma! The high level of sugar and other salts make it possible to add the water to the bloodstream, similar to how an IV solution works in modern medicine. Coconut water was used during World War II in tropical areas for emergency transfusions.
The apical buds of adult coconut palms are edible and are known as “palm cabbage” or heart of palm. They are considered a rare delicacy, as harvesting the buds kills the palms. Hearts of palm are eaten in salads, sometimes called “millionaire’s salad”.

Coconut is also widely used in the commercial, industrial and cosmetic industries. Coir, fiber from the husk of the coconut is made into ropes, mats, doormats, brushes, and sacks, as caulking for boats, and as stuffing fiber for mattresses. It is also used in horticulture in potting compost, especially in orchid mix. The leaves of the coconut palm can be made into toys, brooms, baskets, mats and roofing thatch. Coconut trunks are used for building small bridges and huts; they are preferred for their straightness, strength, and salt resistance.
Coconut is highly valued for use in the beauty industry as moisturizers and body butter. Due to the chemical structure of coconut oil, it is readily absorbed by the skin. It also used in cosmetics, hair oil, and massage oil. The coconut shell may also be ground down and added to products for exfoliation of dead skin.
What’s your favorite way to enjoy coconut?
Sources:
Coconut From Wikipedia, the free encyclopedia
Fun Food Facts for Kids: Fun Coconut Facts
Is Coconut a Fruit or a Nut? From the Best of RawFood